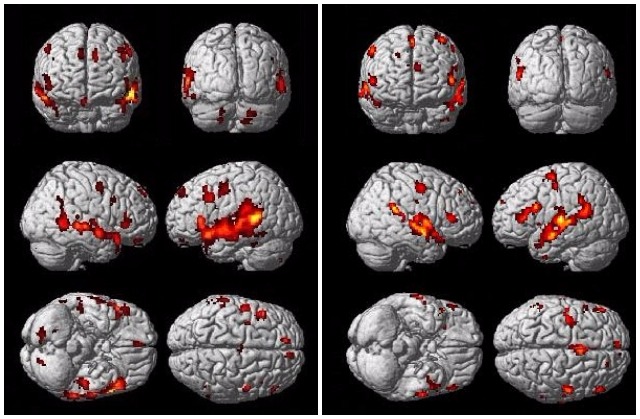 As described in more detail here, fMRI researchers often use “functional localizers” to identify areas of the brain they want to study. The Alice Language Localizer is designed to locate brain regions that are selective to processing language. It accomplishes this by playing intact and degraded speech samples through headphones while a scanner measures the BOLD response to each condition.

As you can hear, degrading a sample makes it unintelligible, but preserves low-level properties of natural speech (e.g. intonation, tone, stress, and rhythm). Thus, brain regions that are significantly more active during the intact condition than during the degraded condition can be thought of as regions that “care about” high-level semantic meaning. The image above indicates the locations of these regions in a couple participants.

I developed this script as part of a larger project that is investigating how the properties a person’s native language (e.g. flexibility of word order, complexity of syntax, and use of morphology) affect how language-comprehension is instantiated in his or her brain. We take advantage of the fact that Lewis Carroll’s “Alice in Wonderland“ is in the public domain, has been translated into dozens of languages, and is fun to listen to.

Using the script requires MATLAB 2013b (or later) with Psychtoolbox installed. You can download the Alice Language Localizer here (Zip File – 599 MB).