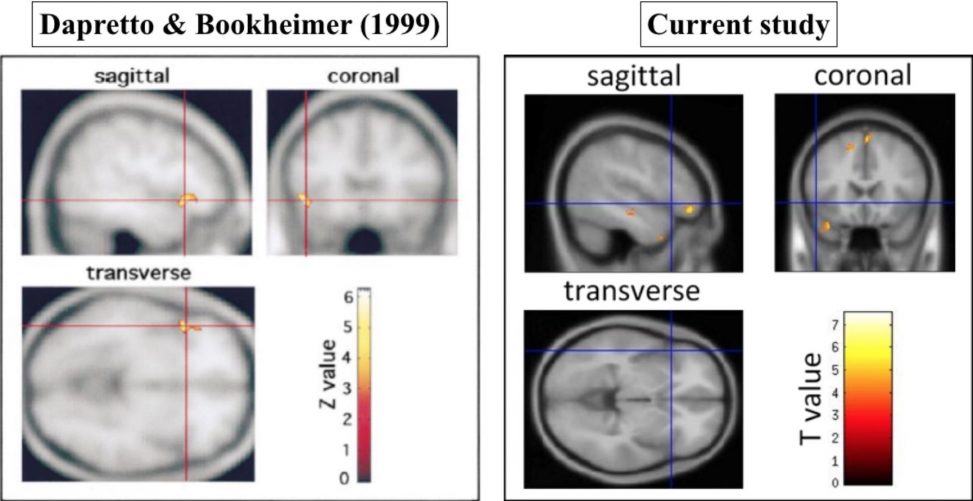 An attempt to replicate a dissociation between syntax and semantics during sentence comprehension reported by Dapretto & Bookheimer (1999, Neuron)

I co-authored this paper with Matt Siegelman, Idan Blank, and Ev Fedorenko. It is currently under review. You can see our submission on bioRxiv. I was involved in collecting and analyzing data, writing up the methods, and generating figures.

Does processing the meanings of individual words vs. assembling words into phrases and sentences rely on distinct pools of cognitive and neural resources? Many have argued for such a dissociation, although the field is lacking a consensus on which brain region(s) support lexico-semantic vs. syntactic processing. Although some have also argued against such a dissociation, the dominant view in the field remains that distinct brain regions support these two fundamental components of language. One of the earlier and most cited pieces of evidence in favor of this dissociation comes from a paper by Dapretto & Bookheimer (1999, Neuron; DB). Using a sentence meaning comparison task, DB observed two distinct peaks within the left inferior frontal gyrus (LIFG): one more active when comparisons relied on lexico-semantic cues, and another when they instead relied on syntactic cues. Although the paper has been highly cited over the years, no attempt has been made, to our knowledge, to replicate the original finding. We here report an fMRI study that attempts to do so. Using a combination of three approaches, namely, whole-brain, group-level ROIs, and individual functional ROIs, we fail to replicate the originally reported dissociation. In particular, parts of the LIFG respond reliably more strongly during lexico-semantic than syntactic processing, but no part of the LIFG (including in the region defined around the peak reported by DB) shows the opposite response pattern. We hypothesize that the original result was a false positive, possibly driven by one participant or item given the use of a fixed-effects analysis and a small number of items (8 per condition) and participants (n=8).