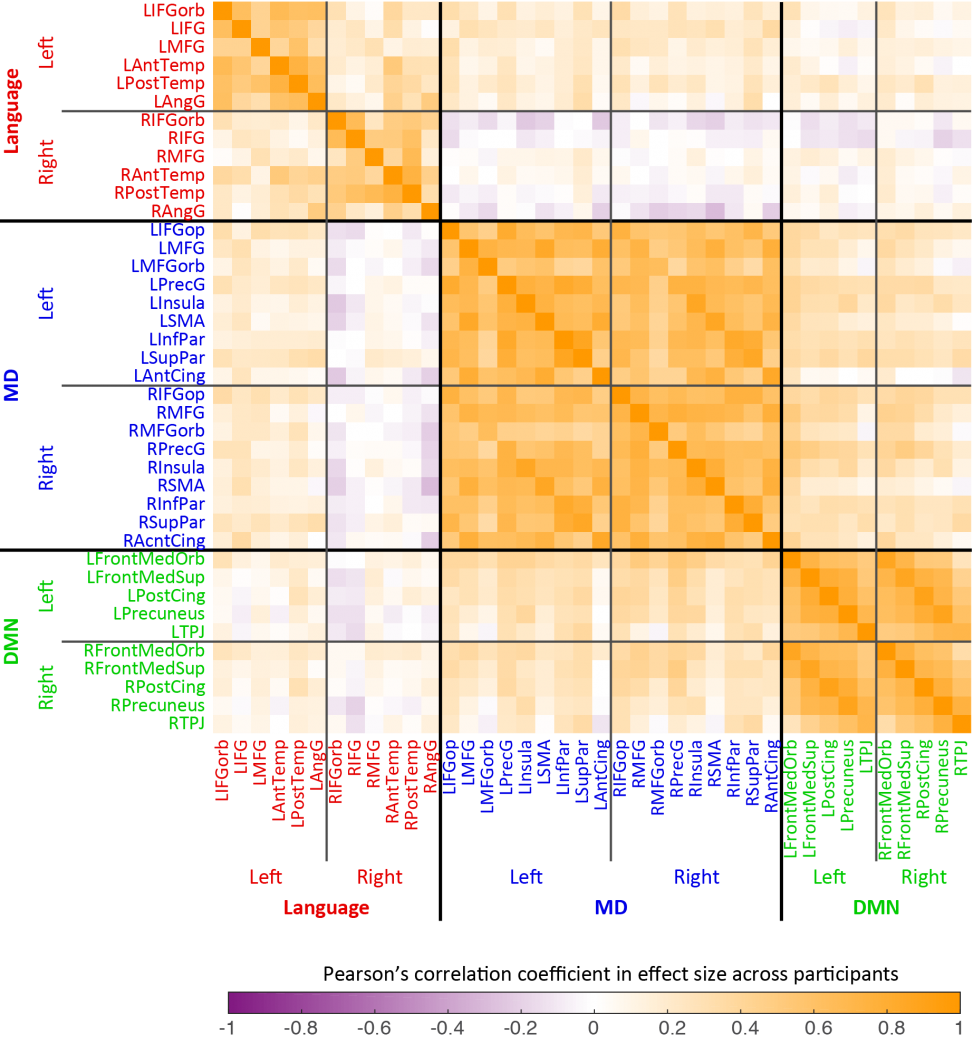 A robust dissociation among the language, multiple demand, and default mode networks: evidence from inter-region correlations in effect size

I co-authored this paper with Idan Blank, Kyle Mahowald, and Ev Fedorenko. It is currently under review. You can see our submission on bioRxiv. I was involved in collecting and analyzing data, writing up the methods, results, and discussion, and generating figures.

Complex cognitive processes, including language, rely on multiple mental operations that are carried out by several large-scale functional networks in the frontal, temporal, and parietal association cortices of the human brain. The central division of cognitive labor is between two fronto-parietal bilateral networks: (a) the multiple demand (MD) network, which supports executive processes, such as working memory and cognitive control, and is engaged by diverse task domains, including language, especially when comprehension gets difficult; and (b) the default mode network (DMN), which supports introspective processes, such as mind wandering, and is active when we are not engaged in processing external stimuli. These two networks are strongly dissociated in both their functional profiles and their patterns of activity fluctuations during naturalistic cognition. Here, we focus on the functional relationship between these two networks and a third network: (c) the fronto-temporal left-lateralized “core” language network, which is selectively recruited by linguistic processing. Is the language network distinct and dissociated from both the MD network and the DMN, or is it synchronized and integrated with one or both of them? Recent work has provided evidence for a dissociation between the language network and the MD network. However, the relationship between the language network and the DMN is less clear, with some evidence for coordinated activity patterns and similar response profiles, perhaps due to the role of both in semantic processing. Here we use a novel fMRI approach to examine the relationship among the three networks: we measure the strength of activations in different language, MD, and DMN regions to functional contrasts typically used to identify each network, and then test which regions co-vary in their contrast effect sizes across 60 individuals. We find that effect sizes correlate strongly within each network (e.g., one language region and another language region, or one DMN region and another DMN region), but show little or no correlation for region pairs across networks (e.g., a language region and a DMN region). Thus, we replicate the language/MD network dissociation discovered previously with other methods, and also show that the language network is robustly dissociated from the DMN, overall suggesting that these three networks support distinct computations and contribute to high-level cognition in different ways. Inter-individual differences in effect sizes therefore do not simply reflect general differences in vascularization or attention, but exhibit sensitivity to the functional architecture of the brain. The strength of activation in each network can thus be probed separately in studies that attempt to link neural variability to behavioral or genetic variability.